skip to main | skip to sidebar

Where Six Roads Meet ─ A celebration of Havelock Norths 150th anniversary 1860─2010.
Historian Michael Fowler will be giving a talk on 24 June 2010 to celebrate the 150th year since the founding of Havelock.
Topics mentioned in the talk will include: purchase and history of Karanema’s Reserve; why the site of the township was chosen; naming of the town; the early geography of Hawke’s Bay ─with the role that the rivers played in road and bridge building; early Havelock businesses and personalities; local government; 1931 Hawke’s Bay Earthquake; the Chambers’ hydro-electric scheme; Hermetic Order of the Golden Dawn and the 1912 naming controversy with Havelock South, leading to a new name ─Havelock North.
The talk is at the Havelock North Community Centre on Thursday 24 June 2010; from 7.30pm until 9pm. Refreshments will be served after the talk.
Tickets are $10 each, and are available from Michael Fowler; Poppies Books, 26 Havelock Road and the Hastings i-site, Russell Street.
Funds raised will go towards a digital voice recording system for the Landmarks History Group.
Posted by Kim Salamonson at 6:58 pm No comments: 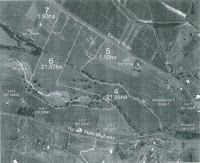 While at secondary school at Christ’s College in Christchurch during 1925-29, Piet developed an interest in flying.
In 1931 he took an aerial photo of the Whakatu Freezing works and Iona College – both which sold quickly ─ and he realized an opportunity for a business.
After earning his ‘A’ pilots licence in 1934, Piet began to plan an aerial mapping company, which he eventually formed in 1936. He left for London four days later to purchase his first plane ─ a Monospar ST-25 Universal.
In early 1937 Piet arrived back in Hastings, and using Bridge Pa Aerodrome as his base, began what is now New Zealand’s oldest aerial mapping company.
The story of Piet Van Asch will be told by his son Hugh, who also worked for New Zealand Aerial Mapping.
Cyril Whitaker, a pilot at New Zealand Aerial Mapping for 38 years, will also attend the meeting displaying some photographs of the company’s history.
The talk will take place at the Hastings Public Library, Warren Street, on Tuesday 11 May from 5.30pm until 6.30pm. Gold coin donation upon entry.
Posted by Kim Salamonson at 6:13 pm No comments:

Meet the 2nd Tuesday of the Month @ Hastings Library 5.30pm - 6.30pm
The landmarks Local History Group was formed at the inaugural meeting on Wednesday 23rd April 2008.
They will meet/organise a speaker every 2nd Tuesday of the month at the Hastings Library at 5.30pm till 6.30pm. Currently the main contact people getting everything started are: Councillor Cynthia Bowers, Michael Fowler, Joyce Barry and Lily Baker.
In the next few weeks Landmarks and Michael Fowler will look after press releases to encourage people to share their Hastings memories and local knowledge with our “community”.
There will be a $2.00 coin donation on these evenings to cover the costs of a present for the speakers and possibly refreshments. Everyone is welcome.

Kim Salamonson
Hastings, Hawke's Bay, New Zealand
My Name is Kim Salamonson and I am interested in genealogy and History. I will endeavour to provide an in depth coverage of each Landmarks Speaker is recorded on this Blog